Until we relauch the magazine, we are posting New Sketches by James Murray,
and New Messages from Robert Murray, Michael and others in 2021. 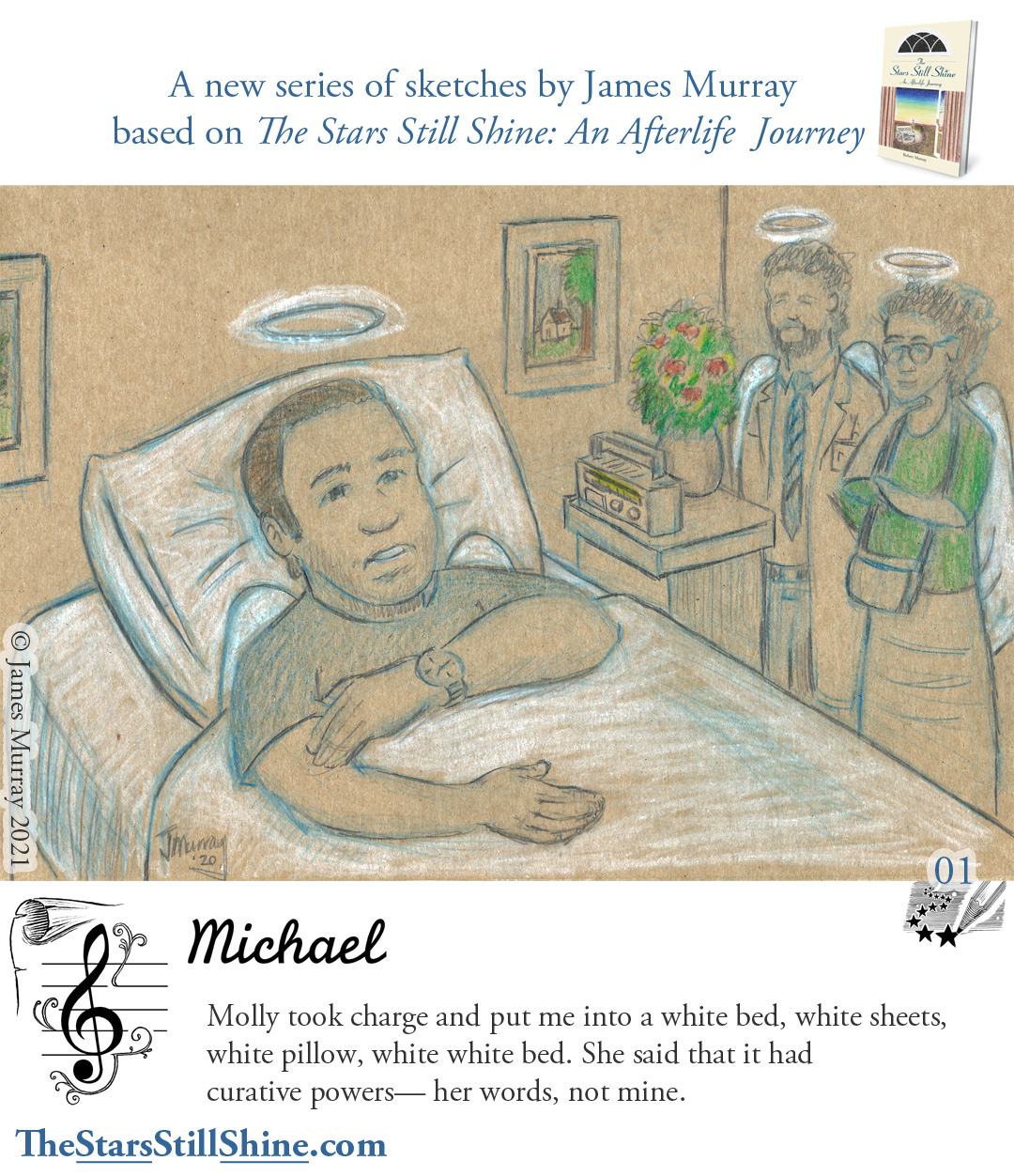 The Stars Still Shine Magazine, a monthly e-mail publication, is a direct link from the afterlife. It is an outlet for talented writers and other "people" in spirit. Michael, Robert Murray and others share messages, conversations, stories and journeys filled with descriptions of adventure and travel. Writers and others from the afterlife now channel through Robert's son, James. The e-magazine launched in January 2003.

This page contains information about the afterlife, a magazine or zine, messages, news, life after death, after life, writings, short stories, September 11, 9-11, planets and much more. 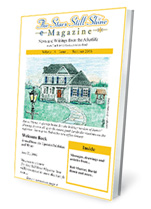 View a close up of the cover

Request the two free sample issues of The Stars Still Shine Magazine. One request per customer.

In addition to the magazine relaunch, our dear Friends of The Stars Still Shine Magazine have something to contribute to the publication. Please return often as we add their writings to the Friends page.

Hello one and all! I still exist and am writing this introduction through my son, James. I understand you are a devoted reader of our magazine 'The Stars Still Shine E-magazine'. Thank you for all your years of readership and devoting your time to our writers and storytellers. They thank you and I thank you from the bottom of our hearts!

Now, I'm writing to tell you that I wish to continue the publication. From where I sit now, I have an office in a new big house on the Other side. I arrived a few months ago and have found my way around though I am not unfamiliar with my surroundings.

When 'living', I wrote many stories, some book length that have not been published. These stories are fiction but do contain influences and inspirations from my 'life' time on Earth and from other 'people' on the Other side. I brought through stories from writers on the Other side when I was alive and kicking. Well, maybe not kicking but you get the idea… These writers helped me immensely; I learned about writing in the process. I give them credit. When bringing through their stories, I like to think I added some flavour. They tell me I did.

I'm presently writing stories but James needs more time to sit down and 'put pen to paper'. He says he will have some of his messages (my news) and his drawings to add to each issue. I can't say how many issues will encompass my writing (my Earth writing) but let's say we will keep you entertained from a few years. But that will not be the end as James will have time to compile more from me and maybe others.

So I just want to add before I end this introduction that I'm very much interested in your input on what we are proposing for the magazine. We look forward to hearing from you.

Much love from your Upstairs Publisher and Writer,
Bob

PS - Carolyn, our Upstairs editor says she is all for the transition of the magazine as long as it sits well with our readers.

2015/2016 Magazine subscribers and subscription:
If you became a subscriber before 2016 and wish to be compensated for any remaining issues of your subscription or if you wish to use your credit towards back issues or other items, please contact us.

The January through June 2015 issues have articles by Robert Murray, Michael, Butch, George Harrison, John Lennon and John Ritter. And there is much more. Below, read more about the Contributers.

Request the two free sample issues of The Stars Still Shine Magazine. One request per customer.

In addition to the magazine relaunch, our dear Friends of The Stars Still Shine Magazine have something to say. Their words are a part of the publication and this web site. Please return often as we add new installments.

Listen to audio messages from Michael and Mark Twain. Their written messages were published in the November 2010 issue.

The following contributors' stories are new and are from the Other Side.

Michael (Mike), Robert's son-in-law, crossed over in 1997. On Earth, Michael was a very unselfish person. He idolized Elvis and was an Elvis impersonator. He loved to sing. He loved to tell funny stories and jokes, and his sense of humor shines through in his messages to this side. Besides what he contributes to this magazine, Michael has sent other messages which are published in a few books and at www.TheStarsStillShine.com. To have a much better understanding of who Michael is, we encourage you to read the books and this Web site.

Dr. Tom (AKA Dr. Yes) is a trained psychiatrist who predeceased Michael.
He is a resident of the Town mentioned in "The Stars Still Shine"
books.

Erma Bombeck was a well known writer of humor. She was best known for her newspaper column. Erma also wrote several best selling books. She appeared on the TV show Good Morning America for eleven years and was briefly involved in a TV movie and TV sitcom series. She died in 1996.

Butch -
Ed Bradley (1941-2006), nickname of Butch for the e-magazine, was best known for his reporting for the CBS News magazine 60 Minutes.

George Harrison - (1943 - 2001) was an English musician, singer, songwriter and music and film producer. He was best known as one of the Beatles.

John Lennon - (1940-1980) was an English musician, singer, songwriter, record producer, artist, writer, actor and activist. He was best known as one of the Beatles.

Lynne & David -
In this series, Lynne and David share their experiences or stories. Lynne and David are husband and wife. They crossed over on September 11, 2001. On Earth, Lynne worked and volunteered as a librarian. She also had been involved with children and young adults, and kept in touch with them. She considered the many kids she worked with as her sons, daughters, children, friends and family. David was an Emmy award winning writer for the TV series Frasier, Wings and Cheers. He, David Lee and Peter Casey formed Grub Street Production, producer of Frasier and Wings.

Michael has become good friends with Lynne and David. Aside from what the three contribute, they have sent messages to Robert about a group of people who crossed over on September 11, 2001. The group includes Lynne and David. Lynne, spelled with an 'e', is not to be mistaken with Michael's wife (living) who is named Lynn, but spelled without the 'e'. To have a better understanding of who Lynne and David are and what they have done in the afterlife, we recommend that you read the messages about the 9-11s group.

David was an English Television presenter, journalist, comedian and writer.

John Ritter -
In a series of Robert Murray's conversations with John Ritter, John shares his experiences and stories about his afterlife. John died in September 2003. He was a talented actor
and producer. He acted in several TV series, TV movies, feature films and plays. He was also the voice of Clifford in the animated series Clifford the Big Red Dog. He was best known for his lead roles in the TV comedy series Three's Company and recently 8 Simple Rules.

Andy Rooney (1919 – 2011), an American radio and television writer, is
notably remembered for his weekly television segment on the CBS news program "60 Minutes".

Messages/Epics from Michael and Nancy

Nancy (Drakensdaughter) tells the famous epics from her home planet of Umbartt. In previous issues of the e-magazine, she is mentioned in Michael's series of messages about an Earth-like planet called Umbartt. In spirit, Michael visits Umbartt and gives a very detailed description of the people, cities, housing, geography and lifestyles. Nancy's epics and Michael's series of Umbartt messages appear in most of the back issues ranging from January 2003 to April 2005 and have also been published in The Umbartt Collection: An Earth-like Planet by Robert Murray. For more information about the e-book including the latest news in Michael's afterword about Umbartt, click here.

In the magazine, a new series of messages about Umbartt appear beginning with...

PLUS, the April and May 2013 issues have articles about another Earth-like planet called Dell.

Or request the two free sample issues of The Stars Still Shine Magazine. Visit the Back Issue Page to view a list of issues. One sample issue per customer.

Renew: For information about renewing your subscription and how to renew, click here.

Order Back Issues. Visit the Back Issue Page to view a list of past issues.

E-magazine Talk: A reader has asked the contributors of the magazine a question, and an answer has been provided. Also see readers' comments about the magazine.

Afterlife: Uncovering the Secrets of Life After Death
by Barry Eaton.
The book contains an excerpt (a message from Michael) previously published in The Stars Still Shine Magazine.

Our acclaimed monthly e-mail magazine is delivered internationally and beyond. Promote your products and services by advertising in The Stars Still Shine Magazine! For more information, contact us.